Vanadium, the alloy-compound element so important in the steel-making industry, is currently produced in only four countries worldwide – of which South Africa is one. Mineral Resources Minister Gwede Mantashe stated in a parliamentary address in May that the country holds 18.4% of the global vanadium reserves. By far the largest producer of vanadium in the world is China, with an output of 43 000mt in 2017, which was down from 2016’s output of 45 000mt. By comparison, SA had an output of 13 000mt last year, which was up from the previous year’s output of 10 000mt.

Vanadium is mainly produced as a by-product of steelmaking and from the processing of other minerals, and is usually supplied as ferrovanadium (a steel strengthening additive) and vanadium pentoxide (from which ferrovanadium can be recovered). Almost 91 percent of vanadium is used in the steelmaking industry with the production of ferrovanadium, thus closely linking the steel and vanadium markets. In fact, the major vanadium price surge of over 800% in the last two years can be attributed in large part to China’s high demand for stronger steel.

Last year saw the Chinese government introduce new rebar regulations, requiring higher vanadium content in steel. The country has also closed off a lot of its steelmaking plants due to strict environmental policy, and has banned the import of four types of vanadium-containing metal slag, further pushing down vanadium supply. In South Africa, the closure of the Evraz Highveld Steel & Vanadium’s Mapochs mine in 2015 also led to supply decreases that pushed up vanadium prices. This has not curbed demand though.

It should be noted that all US demand is currently met by foreign sources, although Uranium producer Energy Fuels is set to restart production at its White Mesa mill in Utah, which will be the only vanadium producer in North America.

The silvery-grey metal has also attracted the interest of the energy storage sector, with it being seen as an alternative to lithium-ion. Vanadium Redox Flow Batteries (VRFBs) are reusable over semi-infinite cycles, do not degrade for at least 20 years, and discharge 100% of stored energy, although they are seen as better suited to grid usage than electric cars because of their large size – roughly that of a shipping container. The market for stationary energy storage is expected to rise from less than 2 GWh at present to over 16 GWh by 2026, with VRFBs possibly accounting for 20 percent of global vanadium consumption by 2030. Whilst VRFBs currently make up only a small fraction of the energy storage market, there is certainly room for growth.

South African-based Bushveld Minerals aims to be a driver of this growth, recently pledging R2.5billion to expand vanadium mining and support beneficiation in South Africa. As one of the country’s primary vanadium producers, the company is looking to increase its output to more than 10 000t/y in the medium term, diversifying into the energy storage sector through its subsidiary, Bushveld Energy.

In an interview with Mining Weekly, Bushveld Energy CEO Mikhail Nikomarov stated that the high dependence of VRFBs on vanadium could increase the compound annual growth rate (CAGR) for vanadium demand, from 2.5% to 8.4% for the period 2017 to 2027. The company is set to develop a VRFB for research purposes for state-owned energy supplier Eskom.

The Chinese government has also backed the technology, with their new National Development Plan calling for the launch of multiple 100MW-scale VRFB pilot projects by the end of 2020. Chinese clean technology company Pu Neng has been awarded a contract to build the largest VRFB in China.

Though current ferrovanadium prices may make VRFBs too expensive to produce, as Evraz’s Alexander Erenburg has cautioned, it is hoped that long-term supply should increase to meet demand through projects such as those of Energy Fuels and Bushveld Minerals, stated above, and others who may enter the market. 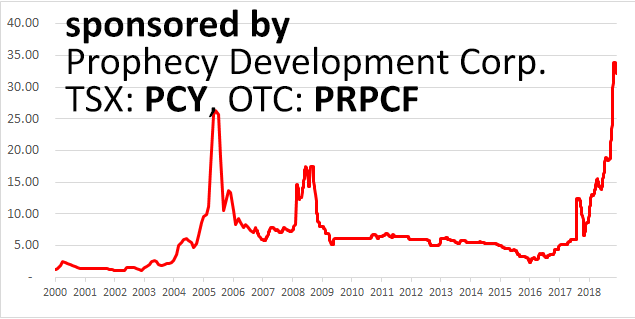 With the phenomenal and ever-increasing demand for vanadium over the last 2 years, and with high prices forecasted to be sustained, Tecoma Strategies continues to develop resource solutions for clients in this rapidly growing commodity.